A circuit simulation is presented in the Micro-Cap software for a dynamic temperature measuring thermistor based Wheatstone bridge.

Dynamic modeling of a Vishay NTC thermistor in Micro-Cap

Dynamic modeling of a Vishay NTC thermistor in Micro-Cap

A circuit simulation is presented in the Micro-Cap software for a dynamic temperature measuring thermistor based Wheatstone bridge. 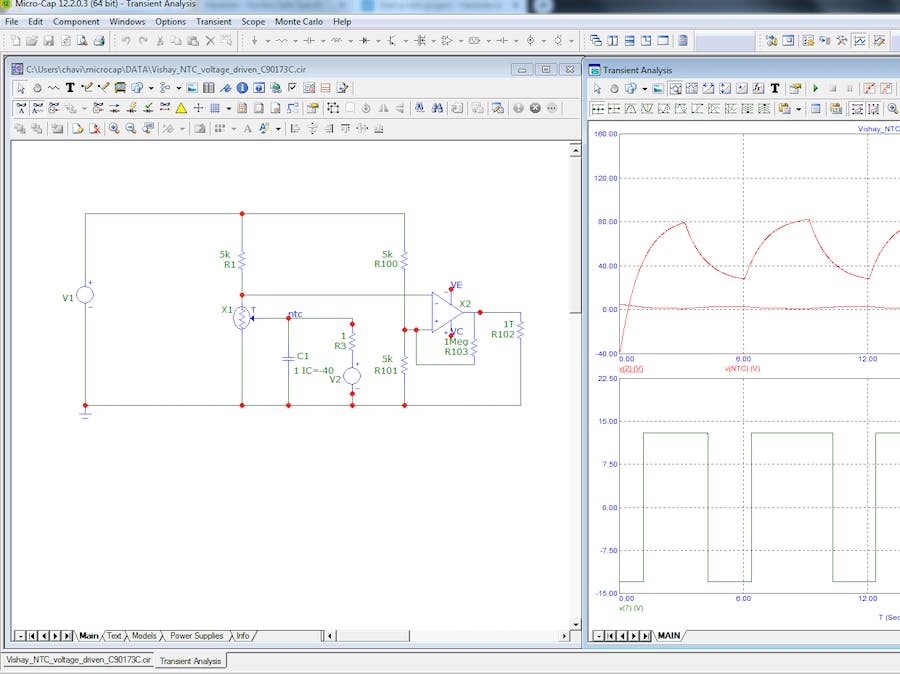 In electronic simulation, it is quite common to design fixed resistors and capacitors. When it comes to thermistors however, it seems harder to find the right model and if you do, the temperature dependance is modelled by an ambient TEMPERATURE variable which you sweep but not drive. The thermistor model in this simulation presents a standard Vishay thermistor NTCLE101E3C90173 (10 Kohms +/-1% with a B25/85=3435K which are the characteristics of parts which can be found in lots of battery packs), with a 3rd pin when the temeprature can be input under the form of a variable voltage, entirely directed by the user. This voltage represents a temperature and can be immediately produced by the circuit self. For example if you design a power MOS FET, which produces heat, it can be directly injected into the thermal (Cauer of Foster) model of the heat sink: this will produce a hot spot and the hot spot voltage can be fed directly into the TEMP pin of the thermistor. In the example of this circuit, the driving voltage is a sawtooth voltage swinging between two temperatures, inducing a periodic switching of an opamp which compares the thermistor voltage to a fixed target voltage

The resulting waveforms for the temperature variation, the thermistor voltage and the opamp output are then as follows:

If the chosen thermistor charcateristics are different than the one presented, it is possible to modify the Steinhart and Hart coefficients described in the netlist. The author of this project knows perfectly well all the problems encountered by user when they import a spice netlist which is valid in one software, into another software. Most of the time, compatibility problems are encountered. Here it won't be the case as the total simulation is provided. The microcap user will be able to use the model as plug and play.