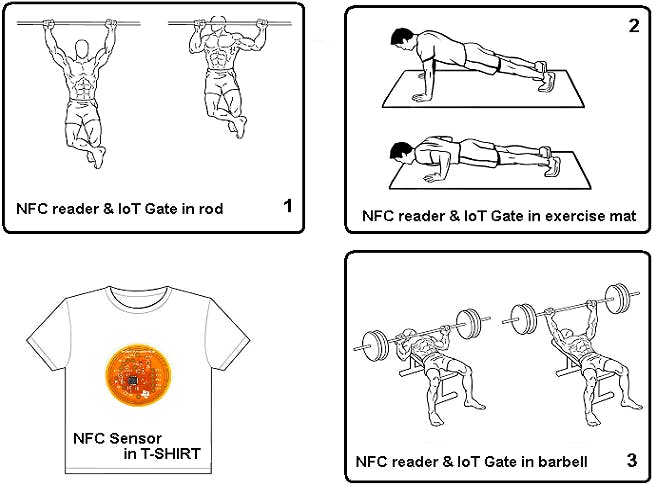 The NFC reader and iot-gate could be mounted in many types of training tools. In presented projects "only" three types of devices was implemented:

In SmartCoach project was used:

TRF7970A EVM ( like NFC reader ), CC3200 LaunchPad ( like iot-gate ) and monounted on T-Shirt RF430FRL152H ( like NFC sensor ). The NRC reader and iot-gate are connected together. Boards are supply form battery ( 3.6 Volt ). Communication between boards are realized via UART.

When series of exercises is finished NFC reader waking up iot-gate and sending NFC chip ID and measurement. After recieving data iot-gate connecting into Access Point. Next iot-gate reading time from NTP server and sending data into Plot.ly server. Data are presended on bar plot and are available here: https://plot.ly/101/~nfc-SmartCoach/

The NFC reader and iot-gate must be connected together. Connections are described in hardware section. Both boards are supply from battery ( 3.6 Volt ).

Both projects ( NFC reader and iot-gate) was made in Texas Instruments IDE: Code Composer Studio verion 6.1. 1. Software was written in C language. Both projects are available in software section.

In final version of SmartCoach system new hardware for NFC reader and iot-gate should be design ( RF7970A EVM NFC reader and CC3200 LaunchPad iot-gate connected in one small and useful device, smaller mounted on or in t-shirt NFC sensor ). Additionally more options in statistics presentation and analysis should be add. For example dedicated server application for SmartCoach users. Used in project NFC sensor ( mounted on t-shirt ) based on RF430FRL152H microcontroller. It is very interesting NFC/RFID FRAM battery-less transponder chip.  Capabilities of project could be extended by implementing more advanced RF430FRL152H functions ( for example: measurements, data logging ).